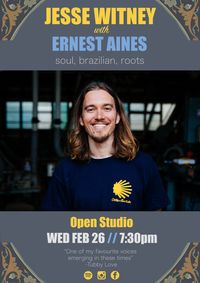 ~Jesse Witney~ Soon to be releasing tracks from his anticipated full length Album, Jesse Witney is preparing to share his music full heartedly with the world. Drawing on years of experience as a songwriter, guitarist and front man, his vibration grows ever more focused on becoming the best entertainer he can be. Five years in the making, his debut album recorded between Australia and Brazil, embodies the joy, precision and creativity that people have come to know Jesse for.

~Ernest Aines~ Ernest is a captivating performer with the abillity to bring any room to complete silence. His performances deliver meaningful sentiment to audiences in the most subtle of ways, often leaving the listener quietly contemplating, giving them a feeling that the song was a direct message to them at that time in their life. Accompanied by Ian Yate's beautiful hand made guitars, Ernest brings life to his songs with his sophisticated and elegent fingerstyle playing.